The Story Of An Unsung Hero Of Menstruation

Project KHEL. Naam hi kaafi hai to let anyone know that we are all about fun, sports and games. I had the same perception as well, before I joined the team on a part – time basis, but when I began to work here, I realized that there were things far deeper than that which were being engaged with, than I could ever imagine. On the one hand, there were lessons imparted on team spirit, empathy, conflict resolution, pluralism and so on from the ‘Made in Maidan’ program and then there were also sensitive topics such as Child Sexual Abuse, Puberty and Menstrual Hygiene Management under the programs named ‘ab BAS!’ , ‘Teen Talks’ and ‘Red Spot’ respectively, which were also conducted.

While I became a big fan of each and every one of these projects right away, the one program that caught my fancy the most was the ‘Red Spot’ one which I believe is less of a program and more of a ‘motion’ to break and address age-old stereotypes and taboos centered around menstruation. More importantly, I admire the empowerment piece that this program emphasizes on so heavily, deconstructing it all down to aspects of self-worth that make or break how women see themselves.

I am aware that especially within my own social circle, I probably sound very weird speaking about periods given that I am a man, but yes it is this very ‘weirdness’ that we want to end through our ‘Red Spot’ program. I say ‘our’ because I absolutely loved the way Project KHEL took up the initiative of breaking the silence that I felt completely at one with, the very minute I learnt of its mission. Any one of these sessions looks so much like a standup comedy show by pushing the most amount of change through an unforgivable sense of humor. They are interactive and just so much fun! The awareness sessions, the Facebook campaign, the community events and any random discussion on periods is so free flowing with the people in the team who lead it, that I have never felt even for a second that we were talking about something ‘dirty’. I give a major chunk of this credit to our Founder Akshai Abraham and the grandmother of Project KHEL, Angana Prasad, who actually founded the program on menstruation. 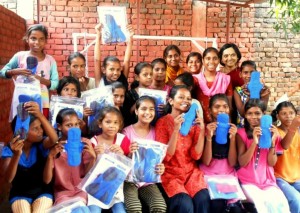 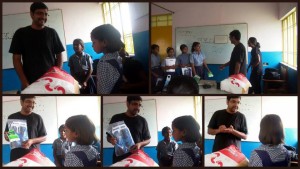 I have read about men leading menstruation campaigns and being celebrated by the world for doing what they do, till I saw Akshai. If Angana is the face of the program, singing, dancing, laughing and talking about periods, Akshai is the backbone of it. I adore every photo, every video and every social media post that Angana shares about her period conquests with groups of girls, women, boys and men. I am so much in awe of her work and with the way in which she inspires responses from her audience, shares anecdotes and makes everyone so ‘period comfortable’ until I finally got talking to her and realized how Akshai was such an instrumental engine behind this driving force. Angana once told me that since her teenage years, she had been passionate about doing something for the cause of menstruation. After joining Project KHEL, she got the space and opportunity to do just that. She initiated the conversation with the team and Akshai wouldn’t have let her talk to a bunch of young people about something so sensitive immediately since he knew the kind of responsibility and preparation required. Numerous exchanges later, a module was finally put in place. Each hour-long session conducted by Angana was followed by a 2-hour feedback discussion led by Akshai. The care with which he groomed the person who in turn was grooming other minds on the topic of menstruation was both informing and intense. The empowerment piece, which I feel is the USP of the Red Spot campaign, is entirely his doing. Akshai knew how a number of organizations were taking care of the health and flow management aspect of periods and wanted to use it in his efforts towards empowering adolescent girls. What I admire best about him is his understanding of the fact that empowerment of girls cannot happen in isolation. It was pretty revolutionary for someone like me to see photos and videos from the first few sessions, where Akshai made sure that the session with girls happened in his presence, with the intention of not just breaking the silence, but also by addressing and killing the hesitation to be free in front of a man.

I feel that a lot of times, Akshai is like the unsung Menstrual Hero and deserves due credit for shaping this program so beautifully by just working hard in the background. I do feel guilty myself for being blind to his role in my admiration of Project KHEL’s Red Spot program and Angana’s spirit, and so on his birthday I couldn’t think of a better gift than to let his contributions to the Menstrual Hygiene sector be known to the rest of the world!

This man has guided Project KHEL’s outreach efforts to over 2200 adolescent girls, 150 adolescent boys and 250 women across Gujarat, Delhi, Kanpur and obviously Lucknow; he has fostered a tie up with a Pondicherry based reusable clothpad – making organization, has worked with the UNICEF to train trainers from 3 districts of eastern Uttar Pradesh with an outreach of 67000+ adolescent girls by creating fun games for Menstrual Hygiene Management and has conceived of a bunch of super fun community games, all by working from the back of the stage, so to speak.

So signing off, and as one man to another, there’s just this one thing I’d like to say, “You’re the kind of hero we need and the kind of hero my parents laud, who work for the cause with no expectations in return.”

Hitkarsh is one of Project KHEL’s youngest coordinators and a graduate in Commerce from Lucknow University. His passion towards sports and children are what connects him to Project KHEL. He has a keen desire of serving his society by building a responsible and capable young generation, especially those who lack the required facilities, for this competitive world.