Medha Kulkarni has been one of the most popular bloggers on our website where she has written about all kinds of issues in menstruation, ranging from the goddess baggage to talking about it to men. She works at an art gallery in Mumbai and identifies herself as a feminist who is deeply engaged with art and design. An undergraduate degree from NIFT and masters in History of Art equips Medha with an insight that translates into writing about art and culture along with issues she feels strongly about. She blogs here, and is a contributor at Metrognome. Medha is among the first bloggers who contributed to Menstrupedia when it started out. Her first article on our blog was called ‘Let’s talk about it.’

Q: How did you decide upon the first article that you wrote for Menstrupedia?

Medha: I had just come back from London and it was the first time that I lived abroad. I had experienced a level of freedom over there that I never had in my life growing up. Growing up in India, if lack of freedom is all you know, you don’t question it. But then you experience something better and you come back to find that everything is just so frustrating. I was irritated by the fact that even though it was so hot in Bombay if I am travelling by public transport, I had to be so covered up. I was irritated by the fact that when I’d go to buy tampons, first of all I’d get a dirty look because for some reason tampons are associated with loss of virginity. Of course how dare I, considering I don’t have Sindoor or Mangalsutra on. The guy won’t even make eye-contact with me, he’d wrap it in a black polythene as if he is giving out drugs or doing something illegal. Parents would actually take their little kids away when I went up to announce that I need tampons at the counter. As far as the secrecy bit goes, I remember being told that this is a secret and that I shouldn’t be telling people about it, especially not boys. I did those things because I thought that’s how it’s supposed to be, but it just never made sense to me. Also, in the age of 13-15, when almost all our girlfriends are getting their period and sharing their experiences, there will always be at least one who’d say, ‘Eww, can we please change the topic and not talk about this?’ as if it were something disgusting. I just didn’t understand! I don’t find the process itself dirty too, for heaven’s sake we pee and poop – this is cleaner than that!

Q: Do you still struggle with the silence around menstruation?

Medha: Not anymore. I have gained a lot of confidence as I wrote more and more for Menstrupedia. While I had always disagreed with the secrecy, I didn’t want to piss people off or upset them. For instance, if my grandmother would not want me entering a temple on my period, even though I’d disagree with it, I would listen to her simply not to upset her. But recently I went to buy tampons and the guy tried to cover it with a bag, I immediately asked him not to saying that I am not ashamed of it and he shouldn’t be either. Interestingly I launched into a little speech over there! The people around me they all started smiling actually, the guy blushed and agreed with what I said. I haven’t yet reached a stage where perhaps I would tell my boss that I am not going to go for a meeting because my back is hurting, but I am getting there slowly. I feel that being a writer for Menstrupedia has empowered me to turn beliefs into actions now!

Q: Did you have people reach out to you after you wrote for Menstrupedia? How were your perspectives received?

Medha: So once I started writing for Menstrupedia whenever I’d meet up my friends I’d tell them that I wrote this article and it got shared like x number of times and I talked about y in it. I would actually see some discomfort in the room which would vanish quickly because everyone could somehow relate to it, even the guys with their sisters and girlfriends, and we’d have a healthy discussion about it. A lot of my girlfriends have responded to me personally by thanking me for writing an article saying that they were thinking about the exact same thing. I also got some suggestions from people for topics to talk about the next time I wrote.

I started writing when Menstrupedia was very young and when it was shared I’d be tagged in it and some of my friends would reach out to me giving their feedback on it. It was still in a private sphere though. But once the Facebook comments were integrated in the blog, which was around the 2nd time I wrote for you guys, I had some discussions happening on that platform among strangers. Some of them disagreed with me while most agreed with what I wrote. Some also added on to it! It was really nice to see that I was able to spark of a dialogue of some sort. I don’t care if you disagree with me, as long as you have a point, as long as we are talking about this!

Q: Indeed! And since we are on the topic of speaking up and you have identified yourself as a feminist, what are the other issues, or the silence around them, that bother you?

Medha: Being a feminist in India, there is so much you can get worked up about. I am very vocal about representation and treatment of women at workplaces and in media. There are such few women in Bollywood that girls can look up to, which is really sad because nothing has the kind of reach like it does. All I think of is Kangana Ranaut. I also think Hollywood doesn’t do a great job at it. The way women are represented in these media is very shallow and two-dimensional, the same old hysterical women who is silly, needs protection and saving by a man. This makes me so angry! Lately, I have read up a lot about fat-shaming and body positive movements which are also closely linked to representation of women in media, I have a few things to say on this which I hope to do soon through writing.

Q: Have you had a chance to engage with the concerns you just talked about, in any form?

Medha: I have been an armchair feminist so far. If I had a platform, I am sure I’d happily go out and do it but I am not influential enough to be invited to panels yet, but I think it’s only a matter of time. I am going to find myself something like Menstrupedia where I can send in my articles.

Q: But don’t you think armchair feminists generate so much necessary dialogue that we don’t give enough credit to?

Medha: I think you’re probably right, because I have noticed that in discussions maybe 1 guy or girl from a 100 might change their mind about something. Being an active social media user I am approached by people whom I haven’t talked to in a long time, to tell me what they think about the feminist perspective in the comment/post I just made. I think that’s great because feminism has become such a bad word these days. It’s awesome that we can gather allies like this! From one person the thought may spread to others. One cannot deny the strength of the medium of word-of-mouth despite it lacking the scope of an article.

Q: So what other topics do you write on? What would be your favorite piece of writing by you?

Medha: Actually my favorite article that I ever have written would have to be ‘Does Popular Media reaffirm the Menstrual Taboo?  It talks about how women are portrayed in popular culture, television, advertising, film and media. It’s very close to my heart. I actually got the idea of writing from watching an advertisement and thinking about how stupid it was. That’s the article that I am the most happy with! My other articles have mostly been for work, so the dynamic is a little different. With Menstrupedia it comes straight from the heart, thus my affection for them is much more. 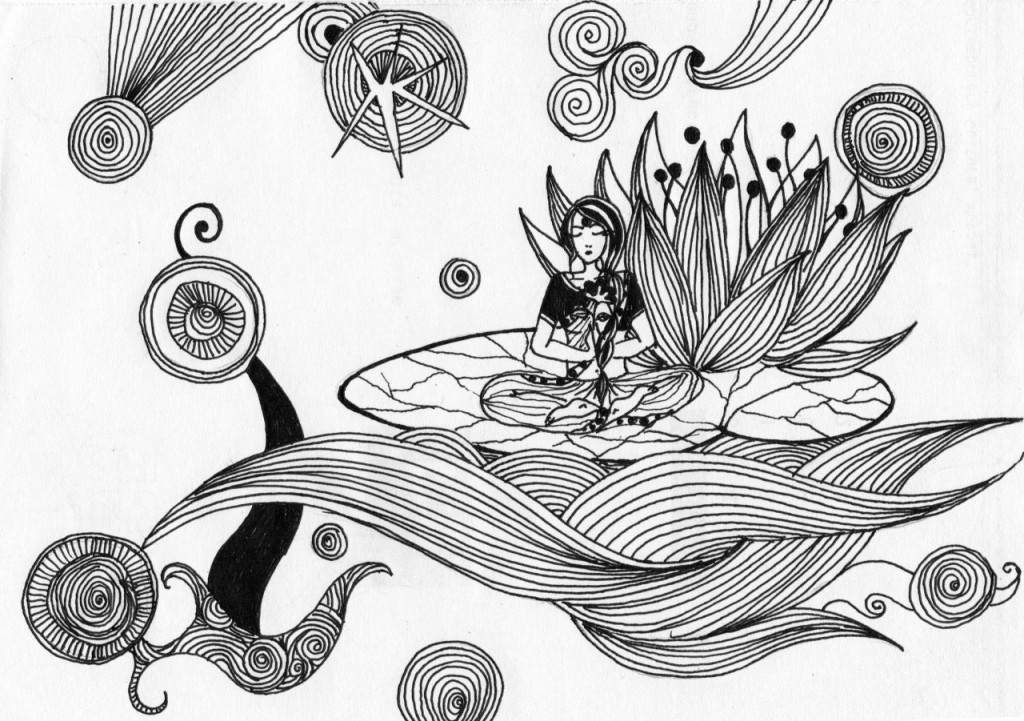 Q: Awesome! Also, because you’re an artist and a designer I am just curious to know how you think art can play a role in menstrual activism.

Medha: I am a very firm believer in the power of the visual. It is also the place where the popular culture blog-post originated. I honestly do believe that a picture does speak a thousand words. I think the kind of conversations an image can initiate are much greater in scope to that of an article, like take for example the drummer of M.I.A. who got so much response/dialogue based on one image. Street Art Delhi is very active and we have graffiti picking up a lot of respect and momentum in India, although internationally it has been quite powerful for a while now. However I have not really come across an in-your-face mural, bang in the middle of the city which depicts a menstruating woman in a beautiful visual way. In general you only see women being depicted as Devis and Goddesses, but you don’t actually see the red drops of blood and how it is so connected to life. It’s very simple, nothing that glorifies periods, which is also something I am very much against as I mentioned in my Goddess baggage article. A visual that shows blood in all its normalcy. I mean, can you imagine the impact of a bleeding woman depicted on a wall that could be seen from kilometers, and hundreds of people seeing it every day?

Q: For someone who wants to write about anything that they feel strongly about, first-timers who don’t consider themselves to be much of a writer, do you have any tips to share?

Medha: I don’t consider myself a very good writer. I just wanted to be associated with Menstrupedia and the idea, which is why I wrote for it. First things first, just put down what you feel about the topic you have chosen; no matter how tangled your thoughts and how messy your sentences, it’s all right if it’s not coherent. Then probably don’t look at it for the rest of the day and the next day things will jump out at you. You’ll realize things you want to remove or add. It is also true that the more you write the better you get. Maybe your first article might be raw and amateurish but submit it anyway. What’s the worst that can happen? Your article may get rejected? Big Deal! Write again, not like it’s the last time you can. Take the plunge!

In Conversation With Our Favorite Blogger & Menstrupedia Champion: Gyanam Saikia

Gyanam Saikia hails from Guwahati, Assam. He is passionate about working towards removing the senseless taboos

Period Positive Posters From Around The World!

This #MHDay28May we decided to take up a mission. We wanted to make the online community
This photo is copyright protected