Nitish Bhagat got in touch with us during one of our workshops on Menstrual Myth Busting with OoWomaniya. During the workshop he came to learn that Menstrupedia Comics are heavily subsidized for schools, non-profits and other initiatives. When he told us about the Period Project, we were really excited to collaborate with his team to enable menstrual education for girls in rural Rajasthan! In an incredible initiative, Nitish and Kalyani convinced the citizens of these villages to contribute to this cause and collect initial seed money. Later on, the team of Period Project and Menstrupedia joined hands to raise the remaining funds required with the help of a crowd-funding campaign. It was heartening to see the passion and dedication of this team to go that extra mile and successfully finish a mission in a holistic manner. In conversation with the trailblazing team of The Period Project…

Q: What is The Period Project?

Nitish: We are a team of three people in the Period Project, Nruparaj Mahananda, Kalyani Joshi and Nitish Bhagath. Kalyani and I were Gandhi Fellows at Kaivalya Education Foundation and Nruparaj Mahananda was the Program Leader at the same organisation. We were involved in working with the schools in the rural regions of Udaipur, Rajasthan. The Period Project was formed from our interaction with the community and we took it up as a part of the fellowship curriculum.

Q: How did you decide to conduct a menstrual awareness workshop in your community?

Nitish: During our interaction with the community, menstruation was something that we had all heard a lot of stories about. Therefore, we wanted to see if this is the trend in all the villages where we were working as well. We conducted a short survey among the women of the village and, later, among the girls in the schools. The results were more or less in alignment with the results that have been published elsewhere in the country showing a wide-spread lack of awareness regarding the biological understanding of periods, largely due to myths associated with menstruation. That is when we decided to take this up as our community project.

Q: Can you tell us more about the setup of the workshop? Who were the people involved?

Nitish: Initially our target audience was the women of the villages. However, when we conducted one workshop with them, we realised that since we do not have experience of interacting with women, we would have to change the target audience. Since we had been involved in the schools for the last year and a half, we thought that we should perhaps reach out to those who have not yet had their first period/have just began their periods. For the time, we decided that these workshops would be only for girls as we did not have enough experience to mix both the sexes.

Q: Were there any challenges you faced while talking about periods to a group of girls in your community? What was the atmosphere like?

Nitish: Obviously, there were challenges that we had to face because periods are not something that should be discussed in the society. We had a lot of trouble interacting with the women as well as the girls. However, with the support of the teachers, a lot of our work was made simple as the girls were more open and comfortable with the teachers. However, after regular interactions, the girls were open to discussing periods (not directly, but in subtle ways) with me as well. That was a major boost for my morale.

Q: Did Menstrupedia Comic help you in conducting the workshop? How was the comic-book received?

Nitish: One of the biggest tools to make this information available to these girls was the comic. The comic was just released in Hindi when we got them and with the help of Aditi and Tuhin, [inlinetweet prefix=”” tweeter=”” suffix=””]we were able to make the comics available in more than 15 schools in the rural regions in Rajasthan[/inlinetweet]. Teachers were really impressed with the comics and towards the end, we also made it available in a school that had only male teachers. This way, the girls would be able to read it by themselves and understand menstruation.

Menstrupedia Comic is the best way to teach your daughter about periods.

Q: Any insights on how you went about the workshop and it’s flow? Did you adopt certain techniques to approach tricky topics?

Nitish: Taking the learning from our failure with the workshop for the women, where we conducted the workshop ourselves, we decided to get the help of organizations that have been doing it on a daily basis. That is how Jatan Sansthan, Udaipur helped us with voluntary support by conducting the workshop for girls and teachers. They had a brilliant way of addressing even the most tricky topics such as the biology of menstruation in an interactive and fun manner. They used a special apron to demonstrate the menstrual cycle and played passing the parcel to talk about myths vs. facts. 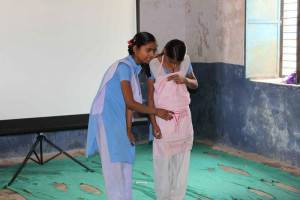 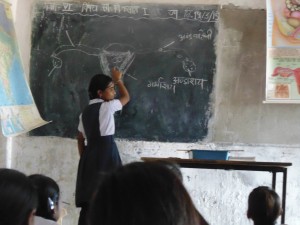 Nitish: The major takeaway was the fact that it took only about two hours to keep a girl informed about what might happen to her in due course of time as she grows up. This[inlinetweet prefix=”” tweeter=”” suffix=””] little information can go a long way in shaping her self esteem, morale, confidence[/inlinetweet] etc. Also, support from Aditi and Tuhin was invaluable. More than just making the comics available, they were constantly guiding us throughout the project. Right from helping us raise funds, to managing social media, to hosting us for lunch and tender coconut ice-creams, it was an ideal example of mentoring. The success of the project owes a great deal to them (I know that they will act like its not that big a deal!).

Q: Were there any striking conversations and questions the girls asked and your observations regarding them.

Nitish: While I do not remember a whole lot of conversations that I had with the girls, I will always remember the times I spent in the classroom, trying to ask the girls to fill in the questionnaire and trying to explain to them what the questions meant.[inlinetweet prefix=”” tweeter=”” suffix=””] The awkward silences that would eventually lead to acknowledgement of the prevalent menstrual practices in their society[/inlinetweet] was always a special moment.

Q: Do you plan to conduct more such workshops in future? What would you do differently from the ones you’ve done before?

Nitish: Well, since we have graduated from the fellowship, the possibility of taking other workshops is little. However, Kalyani has moved on to Saral Designs and is continuing in her passion to make menstruation more acceptable in the society.

Q: Do you have suggestions on more tools or methods that can facilitate menstrual awareness workshops for young girls?

Nitish: We did convert the workshop into a manual of a sort to help others who are interested in conducting similar workshops in schools or other places. I would love to share it with others who’d like to look into our experience and use it to undertake similar projects of their own.

Q: What was the best moment/part from the workshop you did that you’d like to share, perhaps something that cracked you up or rewarded the effort you put in?

Nitish: I will always remember the frankness with which the teachers came forward to talk about this. I personally had not expected teachers to be ready to talk about their experience on camera. In fact, in one of the workshops,[inlinetweet prefix=”” tweeter=”” suffix=””] a teacher had brought her husband along and he took part in the workshop[/inlinetweet]. This might sound pretty normal in a city (although, I would not be surprised if it is not), but in a village that is extremely conservative, secretive about such things, it was a real moment of happiness for us!

Interviewed and Edited by – Palashi Vaghela

Palashi is a content wordsmith at Menstrupedia. She tweets as @palashi19