Menstrual Leave: Do We Really Need Them

One day in office… 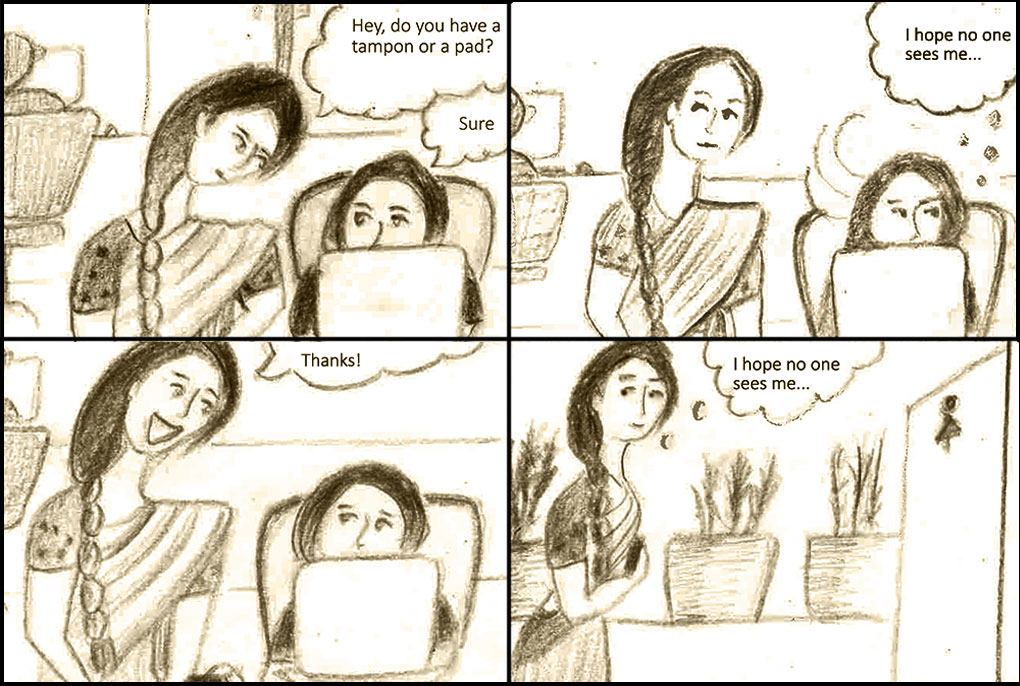 The above exchange is just an example of how women (including me) experience their menses while at work. Though this does not include those who suffer from debilitating pain and discomfort during ‘those’ days, it does point to an underlying shame that accompanies this ‘once-a-month-occurrence.’ Working along with male colleagues, women often feel the need to hide any signs of their reproductive well-being for fear of making the men at office uncomfortable. This is more pronounced in offices where men outnumber women considerably, or are less sensitive to women’s needs. It is also reflective of a conservative society where women have been conditioned to believe that talking about their menstrual cycle is taboo. It is within this setting that I would like to examine the discussion and debate around menstrual leave.

Menstruation is a natural biological process for women in their reproductive phase. Research shows that the discomfort and pain a lot of women undergo during this time isreal. For a considerable number of women, it does affect their work and hinders their ability to be productive. Despite all this, most of them report to work and go about their lives without taking a break.

Now, the policy of providing menstrual leave to women assumes two things. First, that all women, irrespective of their age and medical condition or choice of drugs, menstruate. So it automatically ceases to be useful for menopausal women, or those who do not menstruate owing to the intake of certain drugs or birth control pills. Second, it assumes that this biological phenomenon is so debilitating for them that they cannot function normally without taking a break from work. Research has repeatedly shown that for a majority of women, it is not menstruation itself, but external factors like concerns about hygiene along with myths and taboos, that hinder their productivity. Interestingly, in most countries where menstrual leave is provided, most women refuse to avail them. Japan is one of the prime examples. A menstrual leave policy also asks women to state specifically that they are taking leave due to their monthly cycles, which makes a lot of women uncomfortable, especially if they work under a male supervisor. Moreover, such leaves could be potentially misused by those who may not need them. Now, for the women who do experience significant pain or discomfort during this time, there are always sick leaves that they can avail without necessarily having to explain the cause of their distress.

Proponents of the menstrual leave policy argue that it acknowledges women’s specific biological needs and serves to empower them by providing certain benefits so that they are more productive and comfortable. They add that it is to the company’s advantage if women are allotted certain days off to rest and recuperate so they are able to function better on other days. Some even compare it to the maternity leave, arguing that there was a time when that too was looked down upon, but now is accepted and recognized globally.

These arguments fail on two counts. First, not all women need a break from work. In fact, the majority of women would rather have an understanding group of colleagues and a flexible work environment that acknowledges their specific biological requirements without making them feel ashamed or ill.  Moreover, allotting menstrual leave fuels the idea that women are incapable of being functional while menstruating and need to be isolated and kept away from their daily activities. My contention is not that they should not be allowed to take a day off but to suggest that it should be left to women to decide whether they need a leave or not, without having to justify their choice. Second, maternity leave cannot be equated with menstrual leave because it is not only more arduous, it occurs just a few times in a woman’s life as compared to her menstrual cycle which is a monthly occurrence.

We have come a long way from the times when women were shunned from participating in daily activities while menstruating, as they were considered impure and incapable of being productive. The notion of menstrual leave risks reinforcing this idea and giving further impetus to those who consider women to be a burden on an organization. Instead, it is important to foster an open and considerate workplace culture, with ample flexibility and facilitate an easy conversation around women’s reproductive health.It is when women are empowered to take their own decisions—rather than demanding concessions—that the goal of gender equality in the workplace can be truly achieved.

Author: Apurva Kandicuppa
Apurva works as an Assistant Designer at Indian Institute for Human Settlements, Bangalore. An Engineer and a Disaster Management Professional by education, she loves to sketch and write in her free time.