Why 2015 Was the Year When Periods Won

Looking back on 2015, one realizes that several instances that made headlines were invariably related to the word ‘Gender’. Be it art, Instagram, censorship, sports, sustainable menstruation or taxes, it was this one magical word that held them all together. We have all had our moments of activism in the string of events that have taken place this year; events, that have had some bearing on our lives as women in India. We all might have not gone out on the streets and held a placard, but we definitely seethed in rage even while sitting at our desks.

On a personal note, 2015 was the year when I warmed up to the idea of using internal devices to manage menstruation and finally got around to using a menstrual cup; and most importantly, the year in which my mother and I have happily shed our collective prudishness over menstruation and other such processes. [inlinetweet prefix=”” tweeter=”” suffix=””]The ‘personal’ is also ‘political’[/inlinetweet], as the feminist Carol Hanisch once said. The events that bear significance in my everyday life are either fuelled by social media movements or have themselves snowballed into larger political and social dialogues. No event can be isolated from its socio-political structures. Here are some such events in the world of menstruation that have grabbed eyeballs, sparked conversations and debates, and made us re-think our stance about several pertinent issues: I Bleed, but I do not Stain

In March, Rupi Kaur, a young Sikh-Canadian poet and photographer posted a photo-set on Instagram that captured menstruation in its mundane reality. Curated for a course in Visual Rhetoric, one photograph in particular wasfound to violate Instagram’s ‘community guidelines’. The photograph of a young woman lying on the bed with her back facing the audience with a period stain on her gray pyjamas was apparently too visually violent for most people’s sensibilities. Though [inlinetweet prefix=”” tweeter=”” suffix=””]Instagram deleted her photograph twice and eventually got down to apologizing for the ‘mistake’[/inlinetweet], it makes one wonder if our sensibilities are indeed so fragile. Of course, the whole world wants women to bleed so that we have the potential to keep adding cute little babies to the human race. But when it comes to coming face-to-face with the everyday-ness of such a process, our sensibilities are flimsier than a soggy tissue paper. Wow.[inlinetweet prefix=”” tweeter=”” suffix=””] She was not waxing poetic about bleeding, she was not romanticizing it as art.[/inlinetweet] She was merely providing her perspective about what happens behind the closed bathroom door for four days a month.

I Bleed, and It’s Normal

March seemed to be a month full of Gender Activism and in unsettling people around us with our vociferous attempts at Gender Sensitization. On the 8th of March, which happens to be International Women’s Day, Elone Kastratia started a campaign in Germany to voice her protest against sexual violence and menstrual taboos in an innovative way. She wrote thought-provoking and debate-inducing messages on sanitary napkins and pasted them across her university campus. Students across university campuses in India like JamiaMilia, JNU and Jadavpur picked up this idea and raised their voice against sexual harassment and most importantly, against victim shaming, which is a looming problem in the country. While the campaign largely fell under the umbrella of Gender Sensitization, the means of registering protest through sanitary napkins drew considerable ire from our not-so-liberal counterparts. Using sanitary napkins to convey important messages was not merely to add shock value to the whole campaign but in an ironically meta way, it was also to bring back the focus to the shame surrounding women’s bodies and its various natural processes.

I Run, but I can’t Bleed

In August, as the furore around Kaur & Co.settled down a wee bit, Indian origin musician and marathon runner, Kiran Gandhi, decided to be uber cool and run the London marathon while she was on her period. Having been rehearsing for the marathon for a year, she didn’t want to give up on running just because she started her period the night before. And she ran. Ran smiling all the way till the finish line even as blood stained her glossy pink pants. Though men and women posed the usual questions – Couldn’t she use a tampon? Why run at all while on your period? Isn’t this just a publicity stunt? Why make such a fuss about it? – who are we to judge her decision about how she wanted to run?[inlinetweet prefix=”” tweeter=”” suffix=””] Ladies and Gentlemen, it’s HER body, and HER choice.[/inlinetweet] We all want women to be pleasing peonies to look at, we all want images of women such that they do not jeopardize our closeted notions of propriety and cleanliness. Well, by common  logic, if a woman bleeds, she most definitely stains. So get over your squeamishness already! 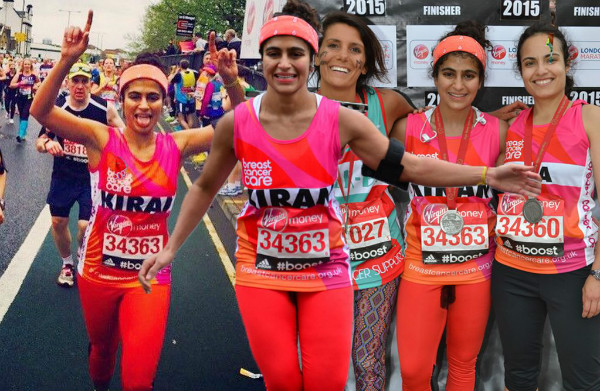 I Bleed, and It’s Not a Luxury

Growing up, how many of us have wondered about why that measly 8 pack ofultra-thin sanitary napkins cost a bomb? Of course, you could always buy one of the other cheaper alternatives. If you did that, apart from wads of cotton falling out of the pads and littering your bathroom floor every once in a while, you would also get the additional benefit of feeling like you were walking around in diapers for four whole days. Who would want that? The situation is not very different in India. According to the 2014 NCPR project titled ‘Investment Opportunities in India: Sanitary Napkin Project’, different states in India currently pay 4% – 5% as VAT (Value Added Tax). However, this is a recent change, and the rate was anywhere between 14% – 15% prior this to this. While the debate around tampon tax keeps raising its head every now and then, women around the world brought it to the limelight this year as well. Basically, whenever the issue has come to public attention, a group of all-male politicians sit together and unanimously agree that bleeding each month must undoubtedly be a luxury. [inlinetweet prefix=”” tweeter=”” suffix=””]So let’s tax and penalize their bleeding uteruses![/inlinetweet] To put things into perspective, items like condoms, candies and men’s razors are ‘necessities’ and thus don’t attract taxes!

I Bleed, and I am Happy

In November, a 20 year-old student, Nikita Azad was irked 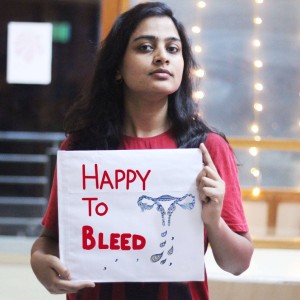 by a statement by Prayar Gopalkrishnan, the newly appointed chief of the Devaswom Board at Sabarimala. Gopalakrishnan said that when a scanner was invented to check and see if a woman was bleeding, that, ladies and gentlemen, was when they would let women enter the holy premises. In protest, Azad spearheaded an online campaign called #HappyToBleed, which apart from becoming viral also drew attention to the shame and discrimination around the process of menstruation. Women (and some men) from all over India posted their photographs by holding sanitary napkins that had #HappyToBleed written on them. The campaign gave way to several online and offline debates around the issue and did its bit to remove the shame and secrecy around menstruation.

Phew. If you thought that this was an information overload, here’s what you should check out:this hilarious video that Buzzfeed made where they asked men in India to try on sanitary napkins!

Sharmada is a reclusive writer and poet from Bengaluru. She is the official period scoop connoisseur for Menstrupedia and works with Pasand on menstrual and reproductive health. You can drop her an e-mail at sharmadashastry@gmail.com