How Nuns in Ladakh Learned About Periods Using The Menstrupedia Comic

When I found out about Menstrupedia on Facebook, I was overwhelmed by the fact that someone had actually thought about such a sensitive issue and had also taken an initiative to provide information about it on a mass scale through the medium of a comic book.
Donating for the Menstrupedia comic book was just a small way of being a part of this movement for me, but then I kept thinking, how else could I really contribute to it?
And then the answer came to me!
I was travelling to Ladakh to volunteer as a teacher at a couple of nunneries during the period between September and October this year. “Could I possibly introduce the Menstrupedia comic book in these nunneries and see if I can initiate an open discussion on the topic of menstruation and female reproductive health with these nuns?” I asked myself. I thought it was worth giving it a try and thus immediately contacted Aditi Gupta to inquire about the Menstrupedia comic.
I guess I should be eternally grateful to Aditi for arranging to send me the prototype of the Menstrupedia comic book (since the final prints were to be released in November 2013) before my trip to Ladakh.
Now the next question was, would it be advisable to approach the topic as controversial as menstruation, especially in a religious set-up like a nunnery? I would soon find out.
So as soon as I arrived at the Chulichan nunnery in Rizong, I consulted their current teacher Gen Jigmet if I could show the Menstrupedia comic book to the nuns and she was more than happy to let me do so.
Though I had taken the first step towards actually implementing what I had in mind, I was still unsure about how I was going to broach this important topic in my class at the nunnery school.
The saving grace for me was that the nuns in my class were in the age range of 14-25 years (in a way already in the ‘reproductive age’ and aware of what menstruation was all about) and by the end of my first week at the school, had already gotten over their initial shyness and were quite enjoying their classes.
As a result, when I took the Menstrupedia comic book to them and briefly explained to them the purpose of it, they had no reservations about reading or discussing it.
And that was that – they went through the entire comic book, slowly reading it in a group. They discussed the contents among themselves and consulted me whenever they came across an unknown terms or concepts, getting them clarified to the best of their knowledge and mainly because they were not quite proficient in Hindi.

After all the nuns had finished reading, we had an open group discussion on what they understood from the book, what their take on it was, what their own experiences in this particular area were and most importantly, whether they thought that this was a taboo topic which wasn’t supposed to be discussed in school or not.
To my surprise, they all agreed that until they read the information given in the Menstrupedia comic, even they were of the opinion that Menstruation was a ‘dirty’ and ‘abominable’ thing and often wondered why women suffered from it in the first place. After reading the comic book however, their views had changed and now they felt that this was a vital part of womanhood and there was nothing about it to feel ashamed about.
I shared my beliefs and experiences with these girls as well and encouraged them to talk to me about their physical problems, especially those related to menstruation.
To be honest, all this came as a pleasant surprise to me – their inquisitiveness to get their facts right and their incessant questioning, none of which indicated that these budding nuns, who were growing up in a Buddhist institution were in any manner shying away from a topic like menstruation.
The best part was that while this exercise clarified their ideas and beliefs about menstruation, it also helped me to get over my innate hesitancy to approach such a sensitive issue in public and boosted my confidence to take this up as a mission to reach out to the maximum number of girls I possibly could. 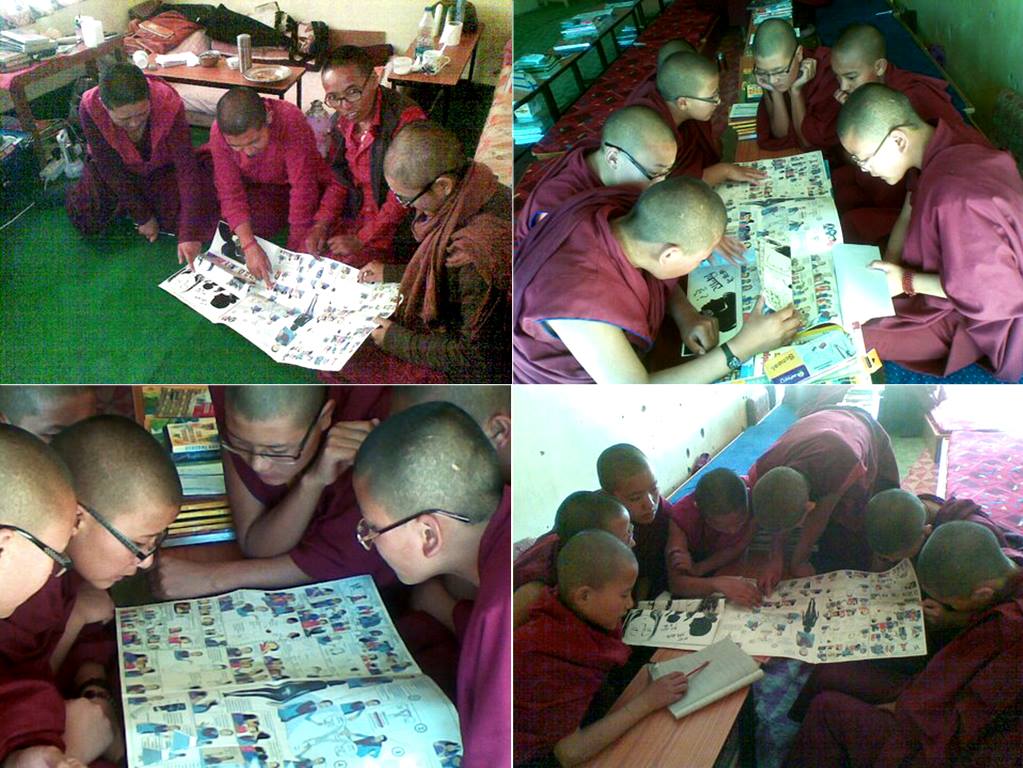 Nuns in two Buddhist monastery in Ladakh(Chulichan nunnery in Rizong, Choglamsar nunnery) using “Tales of Change” to know about menstruation

After Chulichan, I faced a similar kind of encouraging response to the Menstrupedia comic at the Choglamsar nunnery. Fortunately, here my students were nuns between the ages of 13-17 years. They too took this entire exercise of referring to the Menstrupedia comic book very seriously – discussing it openly and also asking me questions like “But is it really necessary to take a bath every day during the menstrual cycle?” The reason behind this was that at most a nunneries having a bath was a weekly and not a daily affair owing to their hectic schedules, coupled with the inaccessibility of any available water source and extremely cold temperatures.
I had to do some quick thinking to answer their question logically but what touched me was their genuine concern for their own health after reading the information provided in the comic.
This was not all at Choglamsar nunnery. The older nuns who looked after the younger nuns studying at this nunnery actually requested me to conduct a session with them before I introduced the Menstrupedia comic to the nuns at the school and they themselves had a lot of queries on the subject of menstruation and wanted to ensure that they knew their stuff correctly, in case the girls came up with any questions in my absence.After we finished with both these sessions, they asked me if I could leave the Menstrupedia comic with them at the nunnery for future reference. Their wisdom was admirable to say the least, because they knew the importance of this topic and were actually making an effort from their side to make sure that the nuns at Choglamsar nunnery continued to receive this information even in the future.
This was a real learning experience for me as a woman and these were my valuable experiences with the Menstrupedia comic book. I sincerely hope that I can continue to take this useful information to many more girls in many more schools – not only in Ladakh but all over India in the forthcoming years.Thank you Aditi, Tuhin and Rajat and everyone else who has put in such tremendous efforts in conceptualizing Menstrupedia for the benefit of thousands of young girls in this country!